Its all in the money, honey...

January 04, 2018
Wherever one travels in the world, when there are State benefits for it's citizens there are promotors and haters. Just 5 years ago the UK ranked at 46th on the global table of benefit given to it's citizens within the first year of being unemployed, with countries such as Taiwan, Tunisia, Azerbaijan and Venezuela ranking much higher.http://euwelfarestates.blogspot.co.uk/2012/04/world-ranking-in-unemployment-benefit.html
Britain's post war Labour government lead by Clement Attlee implemented the Welfare state and included not only income for the unwaged but also free education and health care. Fast forward 72 years and some of the biggest and most controversial changes to the vision of  William Beverage, Liberal politicians' 1943 proposal are amongst us. The NHS is being privatised at a rapid rate, schools are being sold to corporates with the aim of turning education into a business and financial aid is being re-branded as Universal Credit where job seeking is a big brother observed task demanding 35 hours per week of on-line compliance.

Without quite knowing what our future plans would be, whilst I was still waged,  Tasha and I had already started re-designing and implementing changes in the garden. When I first moved in over 4 years ago, to a plot that had never been gardened I was in my element. Every horticulturalists dream is to have a virgin plot. Initially I tackled to the front of the house to keep "The Jones" happy, and ensure that neighbours would quickly understand that the new tenant of No21 was not a relation of The Clampetts and establish myself within the cul-de-sac as an obviously house proud, organised, and fastidious member of the community. (I think in my case this is classed as "fur coat and no knickers"!) I worked solidly on lovingly attacking various areas, choosing perennials,  collecting and filling rusty aluminium containers and then CHALK happened. 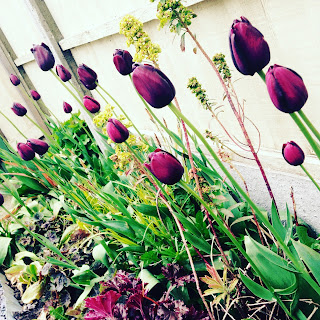 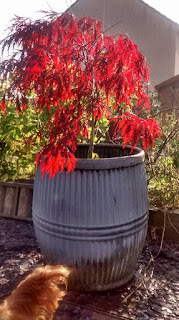 During the first year of CHALK I managed to get into the garden on a few sunny days for sunbathing and pottering. By year 2 any definition of borders or landscape design had vanished under tangles of nettles, dock's, dandelions and ground elder which had previously been at the point of becoming tamed and managed. But by October this year when I relinquished my Directorship of CHALK, with Tasha's help and also the input of a couple of Syrian refugees I had befriended,  we had started to recreate a space that we could be proud of. After spending some time in Portugal earlier in the year we came home with a desire for an outside eating area (totally neglecting to remember that on the border of Wales we have an average of about 2.4 days where alfresco dining is a reality).
My wombling skills had already formed a nice pile of usable timber including 6 lengths of telegraph pole I had managed to talk a farmer into selling to me for £20. Inspiration had come from a visit to Bonn and Tony's small Quinta close to the Serra da Estrela. 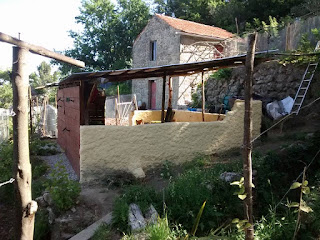 A hastily, but enthusiastically scribbled  design, which quite closely resembled their outdoor kitchen, but with my own wombling and love of aluminium got handed to Hassim, whom was soon to become chief engineer and design consultant of all future structural projects. I've always loved to do anything on the cheap and free is even better,  so pallets were gather and the mountain of begged, borrowed and repurposed wood grew. 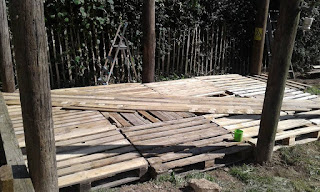 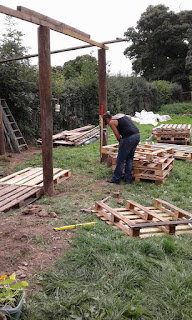 The only spend was the corrugated sheet metal which came in at £340 including delivery from Wolverhampton and hardware around £100. Hassim and his trusted side kick Mustafa  got stuck in and over the course of a few days hard labour  our erection was erected. For those that are concerned about the scale, it literally, to the cm,  within the boundaries of planning regulations. But one must think big when envisioning future hosting of Caribbean inspired alfresco soiree's. The first and must have purchase to dress the kitchen was a Mid-West mock of a smoker/BBQ,  an Ebay purchase for £170 but Smokergate is a story for another day! What I am sort of coming around to explaining is that this sort of spending will not be possible now and we are very glad that it all happened before I quit my job and decided to "practice the art of graceful living" otherwise known as "claiming the dole". 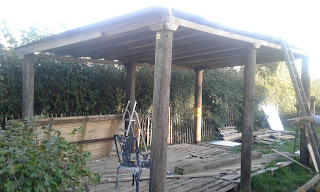 
Before I sign off I must apologise to Joy whom when I put the first post onto FB and ask for critic she very kindly mentioned that blogging should be a bit shorter and punchier. I tried Joy, all the time I was heeding your words and I will keep trying to make it shorter.

Get me in your inbox!

No 21 A Council House Cottage Industry 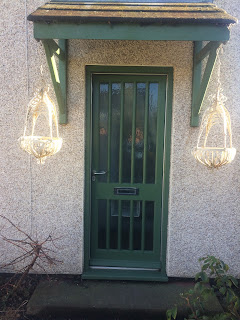 No 21 A Council House Cottage Industry....In the beginning....

Good Morning,  welcome to 2018 and Tasha's and my new project, No21 A Council House Cottage Industry. But what is the project and what has bought us here? After much deliberation and soul searching during the later part of 2017 I decided to leave CHALK the Community Interest Company that I formed with some friends. The main and deciding factor was emotional exhaustion but also described by someone who had heard me moaning as Compassion Fatigue. The work that I did put me in the path of incredibly sad stories on a daily basis and I had reached overload. Tied up with this exhaustion was menopause that had decided to visit me, in what I feel is a premature and aggressive manner.  I lost my passion for caring for others and took to counselling where I was educated on my need to care more for myself. This "looking after no 1" concept was, I felt, quite distasteful and indulgent, but steered by a wise confidant and the love of my partner in "grime", I became attun 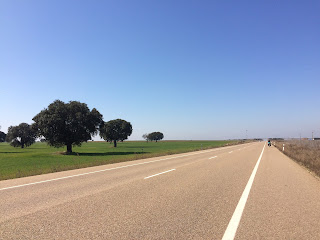 This weekend I was reminiscing on last years wild adventure with my great friend Rebecca. Known for her exploratory and daring nature, I (possible drunk at the time) agreed to a cycle ride from Salamanca in Spain to Lisbon Portugal. Long straight, Spanish road through Cork Oaks. The purpose of this ride was to celebrate a mutual friends life which had tragically ended at his own hands the previous year after many years of battling with his mental health and join together with a few other of his friends at Fiona's Quinta in Carregal do Sal, on the anniversary of his death. Simon had a loving and supportive family with an idyllic childhood, a plethora of friends spread far and wide, that he had easily made as he travelled and adventured.  To many his demise was a painful mystery. At his funeral many of these friends had gathered, had come together to support his family and remember the good times we had shared with this poetically talented, spiritual man, a bringer together of